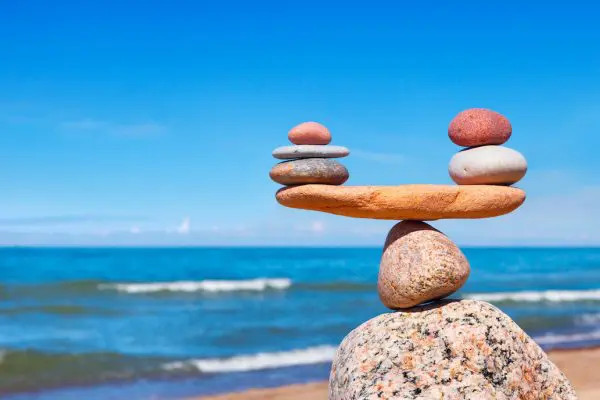 We at Johnny’s Software Lab LLC are experts in performance. If performance is in any way concern in your software project, feel free to contact us.

Operations with long dependency chains are bottleneck for modern out-of-order CPUs. We wrote about them in much more detail in one of the previous posts about instruction level parallelism and memory bound programs. In that post we explored dependency chains in memory loads, here we explore dependency chain in arithmetic operations.

This is a short snippet of code, but from top to bottom there is a long dependency chain. You can see it more clearly if you rewrite each statement in a very simple form with one operation only:

We marked the dependencies between statements with arrows going backwards. As you can see, each statement in the function depends on the previous statement. This effectively serializes the code: there is only one way to execute this function from top to bottom, and thus such code has a very low instruction level parallelism.

When executing such codes, modern CPUs “suffer”. Although they can in theory execute four instructions in a single cycle, in this particular example they can execute only one. Because, except for the one instruction they are currently executing, there are no other instructions remaining.

On the good side, this dependency chain is relatively short. Top to bottom it is 13 statements, in instructions probably around twenty instructions. Take for example the following loop:

Modern CPUs can have hundreds of instructions that are “on standby” – stuck because of dependency chain. So, when stuck in the current iteration, the CPU can move to the following loop iteration and start executing cosine from there. CPUs actually employ this.

But what happens when the dependency chain is really long? Consider this loop:

Interleaving is simple: where we originally had one statement, now we have two statements. E.g. originally we had x = x * tp, and in interleaved version we have x1 = x.first * tp and x2 = x.second * tp. Where in the simple version we had one statement using x or modifying x, in the interleaved version the first statements is using and modifying x1, and the second statement is using and modifying x2. This makes for two independent dependency chains.

To test, we use the following kernel:

The corresponding interleaved version of the above loop looks like this:

For testing we use two systems: desktop system based on Intel(R) Core(TM) i5-10210U and Raspberry Pi based embedded system (ARM Cortex A-72). We repeat the experiment ten times and report the mean numbers here.

The graph depicts the ration between runtime of the simple cosine and interleaved cosine depending on the recursion length.

With regards to instruction count, the interleaved version executed less instructions than the simple version. The ratio is 1.14 on the desktop system and 1.27 on the embedded system for recursion length 1, but as the recursion length grows, these ratios asymptotically approach 1 on both systems.

An important measure in hardware efficiency is CPI (cycles per instruction) metric. With this metric, the smaller number is the better. Here is the graph of CPI depending on recursion length:

Long computational dependency chains (as opposed to long memory dependency chains) do not come up often in software development (they mostly appear in high-performance computing and security domains). When they do come up, most CPUs are forced to execute code sequentially, utilizing only a part of their full capabilities.

We didn’t investigate it here, but it is possible to interleave more than two dependency chains.